Jason and Jenny were well-established graziers in the Burnett region but went shopping for a block with irrigation when the reality of drought began to bite in 2006 and 2007.

‘Esmerelda’ at Malmoe, between Eidsvold and Mundubbera, ticked all the boxes including an artesian water source, bores and the capacity to house a centre pivot irrigator to cover 24ha of improved and developed pasture and cropping.

Jason and Jenny used a Sustainability Loan from QRIDA in 2018 to purchase the equipment, with the capacity to apply 12mm in a 24hr period to the 360-degree circle.

Jason anticipates the investment has doubled their cattle production.

“It helped us enormously,” he said.

Jason said the pivot irrigator allowed them to feed cattle on pasture then move them to a feedlot for 100 days before taking them to market.

“Our turnover is constant, we can do that month in and month out no matter what the weather is doing so we are not reliant,” he said.

“With the irrigator, if its dry the bore has water and we can keep the cattle on a forward plan and keep their condition, so they are heavy enough to go to the feedlot.

“We are pretty lucky at the moment, there is enough surface water in the system for a couple of years.

“Dry weather is our biggest challenge. Especially with the cattle, we get them almost fat enough to go to market then it gets dry. Then we needed to decide what to do. Do we send unfinished cattle to the meatworks, do we feed them grain in the paddock or send them to a feedlot.

“We ran into drought in about 2006 and spent a fortune feeding cattle so we went looking for land with irrigation.

“Drought is a very expensive thing so we are very lucky we do have the water.”

Burnett Regional Area Manager Cynthia Godden was able to meet Jason and Jenny on-farm to chat about their options.

“She came here, and we had a cup of tea and a talk. We showed her the figures and from there the wheels just kept on turning,” Jason said.

“We spoke to our accountant and he suggested we try QRIDA. The interest rate was the main appeal for us.

“It was a very simple process and un-complicated. It was extremely pleasing, we were really happy.

“Our advice to other producers is, try QRIDA. They have been good to us and helped us a lot. We’ve had good experiences with QRIDA so I would tell anyone to go for it.” 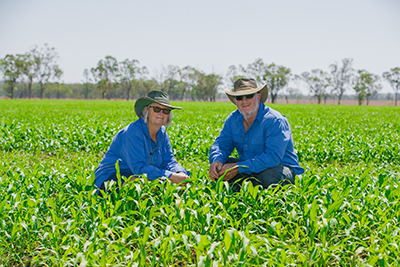 What’s in a pecan: How graziers became nut farmers

The reality of drought met with an established pecan farm in the Burnett was the perfect recipe for farmers Jason and Jenny Smith to diversify from beef to nuts.

They never expected to venture into pecan farming but when they bought ‘Esmeralda’ at Malmoe, between Eidsvold and Mundubbera, they knew the popular nut was for them.

More than 200 acres of pecans was an unexpected addition.

Water security and mitigating the impacts of drought on their 270-hectare property would ultimately become their biggest challenge and force them to work towards a solution to satisfy 22,000 very thirsty pecan trees and feed cattle.

Jason and Jenny moved south from Rockhampton to be closer to Jennifer’s background in farming in the Burnett.

“I grew up on a cane farm at Avondale, north of Bundaberg and when I met Jason we started farming together,” Jenny said.

“We had no intention of going into pecans, we were looking for irrigation to raise cattle but this came up and we bought it, we thought it was a good option.

“We anticipated to be cattle graziers.

“Jason loves his cattle. We say it’s a bit of a hobby but we treat them like part of a big family, they are very spoiled.”

Seven years of nurturing pays off for pecan farmers

It takes about seven years for a pecan tree to yield its first nut, demanding hundreds of litres of water and plenty of nurturing.

It was a lesson Jason and Jenny Smith learnt quickly when they purchased a 270ha pecan and cattle property in the Burnett in 2007, having no previous experience with the popular nut.

Esmeralda was one of only a few pecan farms in the Burnett and the second largest pecan farm in Australia when they took up the challenge.

“I’m very pleased we did. It has been a big learning curve. The place was a bit run down but we have done a lot of work since we’ve been here. I’m happy we bought it,” Jenny said.

“We knew nothing about pecans before we bought here but we have learnt a lot.

“It doesn’t happen overnight, we work seven days a week but it’s worth our while.

“The place is looking pretty good. We have been here 12 years, but it has taken a lifetime to get here. We are absolutely glad we did it.”

Jenny is in charge of pruning and weeding the young trees while Jason makes sure the trees have the water, fertilizer and care they need to grow.

The 280 acre orchard has more than 22,000 trees which produce up to 25kgs of nuts a year – and cost $500 a day to water. Electricity being the main contributor. Jason said initially they grew their own trees but later sourced small tress from a nursery.

The plants are three to four feet tall when delivered from the nursery and are hedged every second year to keep them about 35 feet high and 16 feet wide. Pecans thrive cold winters, hot summers and lots of water. They can grow into enormous trees if not hedged.

“We look after a tree for probably six years and in the seventh year they get their first nuts, maybe only a handful, but it’s a long wait,” Jason said.

“We plant them and nurse them for seven years- the lead time is a fair while.

“They are deciduous, so they are just breaking bud in early spring. Within a fortnight they will be fully leaved, so we start spraying and watering. They love water so between December and February all we do is water for three months. When it’s raining we are very happy, we can save $500 a day minimum.

“We start to harvest in the first week of May and can harvest for 8 to 10 weeks depending on crop size and stoppages such as rain and breakdowns.”

A shaker machine shakes the trees and knocks the nuts to the ground, then a sweeper, sweeps the nuts into a wind row and a harvester sucks them up and they are taken back to the shed to be cleaned.

The nuts are dried in gas heated and fan-forced silos until they reach about 7% moisture content – half the moisture content from when they are harvested, before they are taken to Toowoomba for processing within ten days of leaving the tress.

Jenny said pecan trees grow male and female flowers and are planted in alternate rows to pollenate trees. The wind does all our pollination. We don't need bees.

“The male flower dries out and the pollen is released when there is a breeze and pollinates the female flower,” she said.

“A shuck, an outer case, forms and the nut goes through a few different stages before it opens up. At one stage the shuck is full of water.”

Jason said the value of pecans has doubled in 12 years and while there was demand for pecans in China, USA and South Africa, Australia’s domestic demand remains strong.

To learn more about how this loan can help you, visit the QRIDA Sustainability Loan.

Make a meringue of egg whites and slowly add sugar and vanilla. Fold in Jatz, nuts and baking powder

“Plonk it in a dish (greased), stick it in the oven for about ½ an hour and when cool top with some whipped cream and grated chocolate.”