From the front porch of their cottage home in the idyllic Scenic Rim, Scott and Helen Drynan watch the chance they took on a new primary production industry two years ago pay off - they’re watching grass grow. 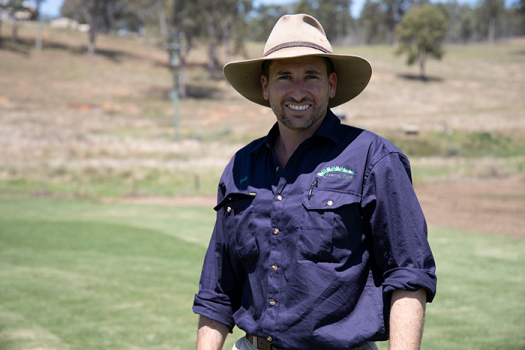 There’s more to growing grass than meets the eye. A day on the 10HA turf operation at Rathdowney sees Helen in charge of the daily mowing on the tractor while Scott, when not working at his off-farm job, takes care of the constant watering and weed control while managing harvesting up to 1000 metres of turf an hour.

Scott accessed a First Start Loan from QRIDA in 2018 to purchase his father’s share of the land, which they obtained in 2001 as a feed and dairy operation, and diversify into turf – an industry he knew little about other than the potential.

“Sometimes I think I’m crazy but I like being outdoors, I like working by myself, making my own decisions and living by them,” he said.

“We’re up every morning and constantly mowing, watering and managing weeds.”

Scott said he wanted more from the land than cattle alone could offer.

“We shut the dairy and went into beef then about two or three years ago I took over from Dad and saw an opportunity to go into turf and went from there,” he said.

“The cattle wasn’t giving me the outcome I wanted. I didn’t have any experience in turf so I have done a lot of researching myself and speaking with experienced growers next door.

“This is where we grew up and I know the area well and I wanted to buy close to Dad’s farm which is down the road.”

Scott said diversifying into turf came with its challenges but ultimately it was a risk he was glad he took.

“It was a bit scary to start with, it was something I didn’t know but sometimes you have to take risks in life,” he said.

“It’s exciting and sometimes daunting. I spend a lot of time on Google and I am always willing to learn new things.

“There are always challenges, whether it be with weed control or limited resources with water.

“We have just got to hope for rain and always keep up the irrigation, using it wisely the best way we can.”

Scott has plans to expand the turf operation, doubling capacity within 12 months, allowing him to work full-time on the farm.

“Hopefully that should keep the sales going and allow me to be on the farm full time which is where I want to be,” he said.

He said he was already aware of the support QRIDA could offer, having used the service to purchase the property in 2001.

South East Regional Area Manager Brian Coe was able to meet with Scott and help him throughout the application process.

“Two years ago I phoned up again when I wanted to buy Dad out. Dealing with one person the whole way through was very helpful,” Scott said.

“Brian made sure we got through the process and was very approachable. Having one person to contact right the way through was great and allowed us to build a relationship.

“It makes it more viable to go straight to QRIDA.”