The Trittons three years on from the 2019 monsoon trough: where are they now?

Three years on from the North and Far North Queensland Monsoon Trough event, grazier Corbett Tritton still remembers the disaster like it was yesterday.

“It was absolutely devastating. We do droughts and we do floods, but the monsoon was something else,” Corbett says.

The Tritton family was among hundreds of primary producers to lose cattle, infrastructure and assets during the disaster event. Corbett accessed a North Queensland Restocking, Replanting and On-farm Infrastructure co-contribution grant, administered by the Queensland Rural and Industry Development Authority (QRIDA) to help replace livestock and recover long-term.

Despite losing so much, Corbett reflects on the support he received through QRIDA as being a key pillar in their recovery.

“We want our communities to survive. There are terrific people out here and terrific communities, and the monsoon really hit everyone hard - not just graziers, everybody. It was so important to get that assistance to get people back up and get a bit of money flowing through the communities.”

“I think the resilience has been terrific and the support that everyone received has been nothing but extraordinary to get everyone back on their wheels,” Corbett explains.

Corbett says that while floods are an almost ‘normal’ part of life in Richmond, this support gives him confidence that if another large disaster was to hit again, QRIDA would be there.

“We’re certainly better prepared. At the time, our cattle were run down and waiting for the rain. So their condition was down already, and that really impacted their ability to hang on. Going forward, we learn a bit from that, we try and maintain a bit better condition.”

Now in Autumn of 2022, Corbett says he’s optimistic looking to the future, despite dry conditions still wreaking havoc across the region.

“We’re still in drought. Last year we had to sell a lot of cattle and we’re fortunate because the market is quite strong. The grant we got (through QRIDA) was a big help, but we are bruising again.”

The Tritton’s plan now is to breed their numbers back up, while giving cotton another crack on their property for the first time since 2012 to help diversify their income.

“Cotton is king at the moment, prices are high. I love growing cotton, it’s an exciting crop to grow,” Corbett says.

He recommends that anyone who was affected by the 2019 monsoon trough event and has not yet accessed recovery funding contact QRIDA. Applications for these grants are open until 30 June 2022.

North Queensland Restocking, Replanting and On-Farm Infrastructure co-contribution grants of up to $400,000 are available for primary producers to restock, replant and repair after flooding caused by the 2019 North and Far North Queensland Monsoon Trough.

For more information about the grants and how to apply visit the North Queensland Restocking, Replanting and On-farm Infrastructure Grant page. 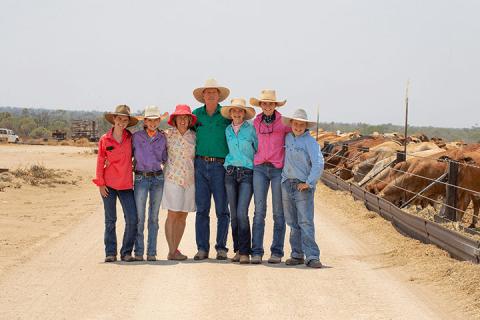