Lockyer Valley milk back on shelves after floods

Almost a year on from South East Queensland’s February 2022 floods, Luke Stock's dairy farm is back to full production, and the primary producer says there’s no way he could have done it without financial assistance from QRIDA.

“When it started raining, I was 800 kilometres away in Bellingen doing some industry related stuff, so I was on the phone to dad trying to get as much of our infrastructure back up on the ridge and out of floodwater,” he said.

“We got 600 millimetres of rain in two days, floodwaters inundated three quarters of the farm, and we essentially became an island here.”

As the floodwaters receded, the devastating damage was revealed.

“All our fences got washed away, we had to rebuild all of our cow laneways and driveway,” he said.

Having faced years of severe weather events, the family naturally sprang into action to mitigate the damage.

“We’ve seen this all before and we’ve got a routine, we know what to do, but it’s never a nice feeling to see those waters rise,” he said.

“Our main priority is our animals and to make sure they’re fed, so we try to build resilience and do a lot of risk management from a flooding point of view.”

The Stock family’s operation usually produces around 600,000 litres of milk annually, but the flooding event put a pause on production.

“To get the cows back onto the farm it took us 20 days, but to be honest full production really takes anywhere from four to six months, it just knocks the animals around so much,” he said.

Luke knew he would need financial assistance to recover from the economic blow, so he was relieved when he discovered Extraordinary Disaster Assistance Recovery Grants of up to $75,000 were available for eligible primary producers from the Queensland Rural and Industry Development Authority (QRIDA).

Luke applied online so he could remain on-farm to continue the clean-up.

“We received the initial grant of $15,000 and straight off the bat, we used that to purchase hay,” he said.

“With the subsequent application of $48,000, we’ve totally rebuilt all of our cow laneways and we’ve done full repairs to all of our driveway and roads so we can have good access to milk tankers daily.”

“You might need to pay deposits on a fence contractor coming out to do work, or that little cash boost to help things start, and we recognise that which is one of the reasons to have this initial application and then a subsequent application,” she said.

"You make another application, it’s a similar process and sometimes easier as we know what the story is, you just show us how you spent that initial money and evidence of payment, such as receipts, to show support of work completed.”

No room for complacency this disaster season

Almost a year on, the Stock Farm is back to business as usual.

“We’ve been 30 per cent down month-on-month in production, and it’s really only probably the last six to eight weeks we’ve started to get back to where we were prior to the floods,” he said.

Now Luke is focussing on building greater flood resilience on his farm.

“If you go back to 2015 and 2016, there was a lot more cultivation, we worked a lot more ground, but in the last four to five years, we’ve gone to a lot more permanent pasture from a flood point of view, so it’ll just be about doing more of that,” he said.

In the event of another disaster, Luke recommends all primary producers be on the front foot.

“I would encourage farmers to be on the lookout for whatever assistance is available from QRIDA and if you look at our situation, it’s been nothing but positive,” he said.

Ms Finney also urged primary producers to get prepared for the next disaster now.

“Keep your eye on the weather and take photos of your property and infrastructure before and after damage,” she said.

“After things calm down a little bit, keep an eye on qrida.qld.gov.au because anything we have available will be there. You can also call us on 1800 623 946 to receive answers to any questions you have.” 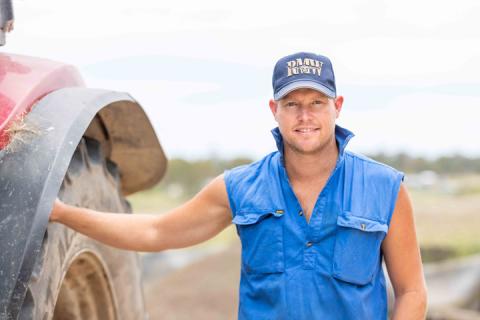