Lessons from a lifetime on the land

Julia Creek grazier Michael Bulley has been on the land his whole life, but he’s never faced a challenge as big as the devastating flooding which swept North West Queensland in February 2019.

He and his wife Brenda own three properties, neighbouring Bindooran, St Andrews and Moonamarra south west of Julia Creek. All three were in the thick of the natural disaster.

On the worst affected property, Bindooran, the Bulleys lost close to 45% of their herd plus 73km of fencing which meant they had to act quickly to save their remaining stock.

“We were away at the time and flew back in at the peak of it and the devastation was unbelievable, there was water everywhere,” Michael said.

“We lost a lot of breeders and a lot of next year’s income. One of our biggest losses was about two thirds of our calves died. It’s going to affect us not just this year but next year also.”

An inland sea stretched across 12km of the Bulleys’ property, in parts up to two metres deep. Their attention quickly moved to re-building fences to contain cattle that had survived.

“When the rain stopped, we started feeding the cattle by choppers and it was at this time we started seeing how many cattle had died,” he said.

“Six days after the rain, we were feeding, watering and shooting cattle and saving what we could.”

As part of the recovery effort, the Bulleys were able to access a Restocking, Replanting and On-farm Infrastructure co-contribution grant, administered through the Queensland Rural and Industry Development Authority (QRIDA) on behalf of the Australian Government, to help replace the lost livestock. 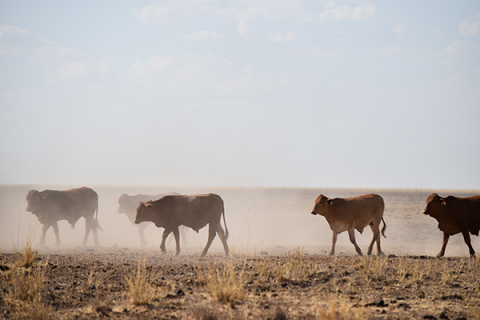 Michael said the ability to draw down on the grant when seasons permitted was especially important to allow flood-affected country to recover before re-stocking.

“At the start the grass wasn’t growing so we were hesitant to restock but we were able to work out what we could carry and get that back in,” he said.

“We can’t stock completely because even though we had 23 inches of rain, we didn’t get the grass we thought we would. We thought we’d have grass up to our waist, but it wasn’t to be.

“The way the grant has been put together has been very good and the structure is very well thought out.

“It’s given people a leg up, it’s been a godsend. Not one cent has been wasted.

“If we had to do it ourselves, we’d have done it a lot slower and it would have had a much bigger impact, so that’s where the grant was good.”

Brenda said it made good business sense for other flood-affected graziers to access the grants to help build long-term sustainability.

“The grant has given us the confidence to move forward and put a plan in place and that’s what we’ve done,” Brenda said.

“Producers should contact QRIDA and get as much information as possible, give it a go, every little bit helps. It’s a painless process, they are all so easy to talk to and get along with. It’s been amazing and the follow-up has been great.”

Michael and Brenda are well-versed in the highs and lows of farming in the North West but admit the monsoon event is among the most significant challenges they’ve witnessed.

“A drought you can manage, but a flood is instant, and you have no control over it what so ever,” Brenda said

“It’s been a big learning curve because we haven’t been through a monsoon flood like we just had and hopefully the next generation can learn from it, how to deal with major disasters.”

Michael said despite the devastation, they were committed to re-establishing their home and business at Bindooran.

“I like working stock. I like the challenge and there has been a few big challenges lately. I love the land and I love the people in it. I just like doing what I do. I can’t let things like this stop me. We were focussed on recovering and kept busy,” he said.

“We’ve been through a lot of droughts and tough times here, but you just have to take things in your stride. I saw my parents go through a lot, but history shows there are events like this and you have to just get up and get going.”

North Queensland Restocking, Replanting and On-Farm Infrastructure co-contribution grants of up to $400,000 are available for primary producers to restock, replant and repair after flooding.