What started as a normal day tending to their Innisfail banana plantation, quickly turned into a clean-up and recovery mission for Sunrise Bananas owners Rahul Baggar and Beant Bhullar.

After owning the banana business for only 12 months, Rahul said they were unexpectedly hit with damaging winds from Tropical Cyclone Niran in March 2021.

“I was surprised because we weren’t expecting any winds that day. We didn’t get notified from any weather app.

“I was working in the bananas doing the bell injecting and the winds started at nine in the morning and they got worse and worse, then the trees started bending,” he said.

Rahul said applying for disaster recovery assistance administered by the Queensland Rural and Industry Development Authority (QRIDA) was front of mind to get their business back up and running as quickly as possible.

“One of our growers advised me there is a meeting with Sam Spina [QRIDA’s Far North Regional Area Manager] and he advised us of all the grants and the loan from QRIDA and then we applied for them.

“He advised us that there were $75,000 recovery grants coming in the future that we would also be able to apply for,” he said.

“Without the grant and loan, it would be very hard to get back on track because all of our fruit was down, we didn’t have any income and our expenses were nearly $30,000 per month and the recovery assistance helped with those expenses a lot. 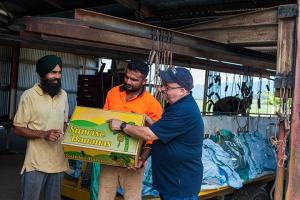 “When we got the initial $25,000, we spent that money on cleaning up the farm, chopping down the damaged trees and cleaning up the bunch covers. Then nearly four or five weeks later we got the rest of the grant, $50,000, and we used that to buy bunch covers and sprinklers because there was damage to the irrigation pipes from the cyclonic winds,” Beant said.

Rahul said that without the recovery assistance it would have been nearly impossible for them to get their banana plantation back up and running as quickly as they did.

“We are new in this business, and this was our first cyclone and without the loan and grant from QRIDA it would have been nearly impossible to get back on track because if we don’t have the money, we can’t grow the bananas,” he said.

Eight months on and Rahul and Beant are starting to pick and pack the first lot of fruit since the winds from Tropical Cyclone Niran devastated their plantation.

QRIDA administers a range of disaster recovery assistance to primary producers, business and non-profit organisations to help with their recovery journey when disaster strikes.

With a network of Regional Area Managers based across Queensland, QRIDA has boots on the ground ready to meet with producers on-farm, provide information on assistance available and discuss the application process. 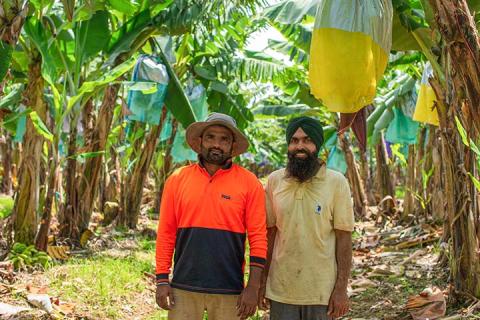