Megan and Gerald Easton are proud of their commitment and legacy to their land, at Maxwelton between Richmond and Julia Creek, even after losing close to half their herd during the monsoon trough weather event.

Despite the trying conditions, the days of uncertainty and the pressure the weather event put on their business, there was never an option to leave.

Cameray Downs, an 11,000 ha property, was in the thick of the flooding event. Half the paddocks were covered in water up to a metre deep, the family’s homestead was only nearly spared and freezing conditions killed close to 700 head.

“There were a few days where we were wondering if we would have any livestock left. That was the way it was looking. It was really close for us,” Megan said.

“The first inch and a half of rain was great, we were hysterical, there was a lot of crazy dancing, but by about day three we realised it wasn’t all fun.

“By about day six I had rum on my weetbix and I told the kids it was to conserve some milk for them.”

To help replace the lost livestock, the Eastons were able to access a Restocking, Replanting and On-farm Infrastructure co-contribution grant, administered through the Queensland Rural and Industry Development Authority (QRIDA) on behalf of the Australian Government.

“It was catastrophic to us, but other people could recognize that. The assistance has definitely saved our communities,” Megan said.

“In my experience, this is the most beneficial and holistic assistance package that has been released to the regions up here, that’s for sure.

“It’s nice to see further down the line agriculture being recognized as a national asset, we need to protect our own food security and people who grow our food. That made a difference in the get up and go phase, to know the people we are largely producing this for do care.” 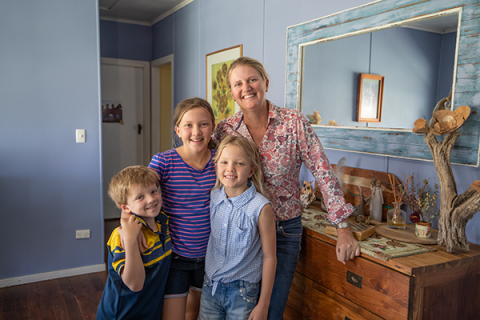 Despite the nationally recognised disaster event the Eastons knew they owed it to the land, their animals, their family and the region to do what it took to recover.

Megan said the restocking grant was able to be drawn down when seasons permitted, which meant they could buy cattle when their land had recovered.

“We accessed some of the funds almost immediately because we had to keep trading and keep doing business. If you’re doing business, you keep the entire economy and the local business operating. If I’m buying cattle, truck drivers are driving and sale yards are processing cattle,” she said.

“The more business can roll, the better it is for the whole district. We have some of the grant funding left to use and when the season permits, we’re looking forward to using that.

“It’s peace of mind to know that money is there. At the end of the day there will always be a loss but to know it’s half as overwhelming, you’re halfway back.

“All we were thinking about was getting back up and starting to trade again, but you have to do that in a way we make sure the country recovers from what it just suffered through.”

She said the grant gave them the ability to replace cattle when they and their land was ready.

“We had to look after our other asset, our grass,” she said.

“A penny saved is a penny earned so you can use what’s saved to buy lick, pay wages or fix a fence. At least you have money to get the cattle started again.

“By accessing the grants, it’s not only improved our own business resilience but also the larger community.

“For us it makes good business sense to access the grants.”

Megan said it was important for other producers to enquire about their eligibility for assistance and play their part in helping the whole industry recover.

“I was really encouraged by the skills of the team that were there to help. It wasn’t like an online application, there are people behind the scenes who know what they’re talking about and they have been very good in understanding the situation,” she said.

“When we came to applying for the restocking grant, it was a relatively simple process.

“There was a really supportive, knowledgeable and experienced skillful team that sits behind the grant and it was an easier process than what I am used to. It was necessary too because I didn’t have much puff by that point.

“Other producers need to apply for assistance because Australia wants them. They need to keep running family agricultural businesses out here, it’s important.”

Across their property, scattered dead cattle prove a harsh reminder for what their business had endured, but Cameray Downs is now largely business as usual.

“They’re a bit like shipwrecks at half tide,” Megan said.

“There are still the reminders around, but you get on with business and life. You get on your horse and keep going.

“It will be one of those events that stay with me forever because fundamentally our job is to care for our animals and our land.” 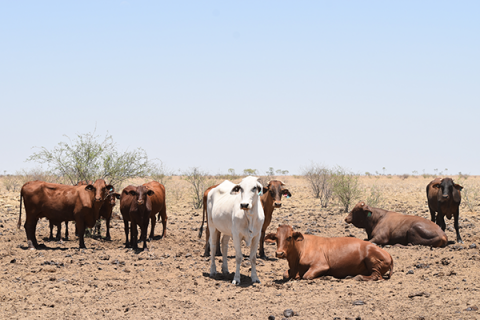 Five generations on the land

Across the paddock at ‘the Shearaton’, siblings Olivia, Breanna and Jacob have just finished the school year with governess Miss Nicky.

It’s mid-November, temperatures are topping 45 degrees and the children are ready for another long, hot summer holiday on the family cattle property, Cameray Downs, near Maxwelton in North West Queensland.

The children are the fifth generation in the Easton family to call the region home and when they’re not completing school through Mount Isa School of the Air, from their converted shearing quarters school house, they’re busy helping to open gates, water livestock and keep the farm running.

It was an eventful year for Olivia, 12, Breanna, 9 and Jacob, 6, who witnessed their parents Megan and Gerald battle the extremes of the North and Far North Queensland’s Monsoon Trough.

After a few days playing in the flood water in their house yard, the children were sent to town in a chopper while Megan and Gerald dealt with the aftermath.

“We have been here a long time. My grandmother’s mother won a ballot way back so she took up residency on the land and we’ve been here ever since. My children are fifth generation in the area so I feel a bit vintage,” Megan said.

“I’ve gone away to boarding school and travelled overseas but I’ve definitely made the choice to come back to this industry and I’m proud to be here. It was an easy choice for me.”

Megan said it was only natural to raise her children on the land.

“I’m proud of what I do, it’s not just a job. I like having our family out here, I like working beside my husband and being able to take our children with us,” she said.

“Agriculture lives in you or it doesn’t. I like the land, I like the economies that go with it, I like producing something I am proud of and be part of the system.

“I am proud to be producing some of the best protein in the world, looking after the land and being in a wonderful environment and existing in a great community.

“Sometimes I don’t feel like I have enough degrees, it’s like being a jack of all trades and a master of none. You need to be a nutritionist and an economist and everything else.

North Queensland Restocking, Replanting and On-Farm Infrastructure co-contribution grants of up to $400,000 are available for primary producers to restock, replant and repair after flooding.