‘The difference between re-opening and closing’: how a beloved Grantham store recovered from devastating floods

There was little that could be salvaged at Hooper’s Grantham Store when it was hit hard by the February 2022 floods.

But seven months after receiving financial assistance from the Queensland Rural and Industry Development Authority (QRIDA), the popular local convenience and takeaway store is welcoming customers again and preparing for the next disaster.

It may not have been much when she bought it – a dilapidated donga, previously ravaged by the 2011 Grantham floods – but, situated in the heart of town, it was full of potential in Tanya Hooper’s eyes.

Her first business, Tanya purchased the fixer-upper in 2017, and after four months of renovations, she’d breathed new life into the building, now a modern takeaway and grocery store.

So, in February, when heavy rain poured, and floodwaters began inundating the country town, Tanya feared all her hard work would soon come tumbling down.

“I was quite worried, so I told my staff to go home because it wasn’t worth risking their safety to stay and pack things up. But that also meant we didn’t have anything prepared to hold up against the weather,” she said.

“I couldn’t sleep throughout the night because it just kept raining.”

A few days later, when the skies cleared and floodwaters receded, it was finally safe enough for Tanya to assess the damage.

“It was chaos. Everything in the store had fallen over – the fridges were smashed, and broken glass and lollies were strewn across the floor,” she said.

Hooper’s Grantham Store received over one metre of floodwater and closed for almost two weeks for the clean-up.

“Most of our products were spoiled so we filled skip bins with rubbish. We had some soft drinks and bottles of milk that were fine, just covered in some mud, so we gave those away to the community,” she said.

"It was a pretty stressful time, but we had lots of locals chipping in, and as we were sorting things out in the store some government representatives came into the shop and told us about disaster grants available from QRIDA.”

As Tanya was an eligible impacted business, she made an initial $15,000 application for an Extraordinary Disaster Assistance Recovery Grant to get her business back-up-and-running as soon as possible.

“To open, we desperately needed new fridges and freezers to store our food,” she said.

“So we made an initial application to cover the costs of those, and it was really easy to apply, all we needed were photos of the damage and quotes for replacing those items.

“We were relieved when we got the money for them just a few days after our application was approved.”

But Tanya still had thousands of dollars of unrecovered products and unusable kitchen equipment, so she applied for the remaining $35,000 of the grant to help replace them. 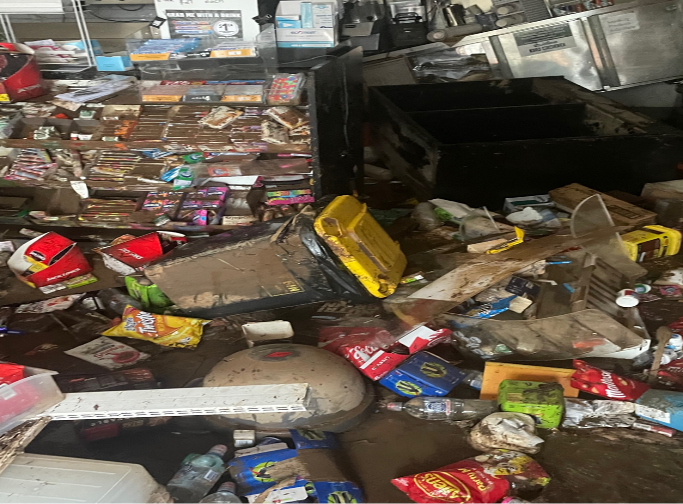 The second application took a little longer than the first because I needed to provide proof of payment for the equipment and goods I bought with the grant money,” she said.

After receiving the full $50,000 grant, Tanya was relieved.

“My husband left his job late last year to come and work for the shop, so it’s basically our only income,” she said.

“The grant was the difference between us opening the business how we wanted to and remaining closed for longer until we could get back up in a reduced capacity.”

Tanya applied for the financial assistance online so she could remain in her store and focus her efforts on recovery.

“It was a very user-friendly process. We were able to scan everything on my phone, transfer it to my computer, and upload it to QRIDA’s portal,” she said.

A Plan to Stay Afloat

For other businesses that might find themselves in a similar situation to Tanya this disaster season, the Grantham business owner has some advice.

“If a disaster strikes and there’s funding available, just apply. Nobody wants to stick their hand up for help, but sometimes you need it, and we were very appreciative of the money we got,” she said.

Tanya has learnt a lot from her recovery journey, and now she’s focused on flood-proofing her store to mitigate the damage from any future severe weather events.

“We’ve sheeted the lower halves of our walls with corrugated iron, moved power points up, and built a heavy-duty shelf to winch our fridges onto just in case,” she said.

To find out more about QRIDA’s disaster assistance, visit QRIDA’s website and select the QRIDA disaster recovery link or call 1800 623 946.